What Is A Reverse Pivot?

A reverse pivot is simply when the golf finishes their swing with their weight on their trail foot. This is caused by a golfer not moving their weight forward enough long enough, and not extending their hips through impact. Here would be a classic example of a reverse pivot: 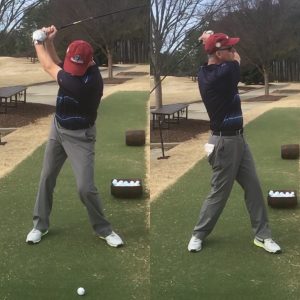 Notice how the weight stayed back throughout the entire downswing? Many people would say that it is was his backswing that caused this. Coaches throughout the years would suggest that keeping the weight forward and leaning more towards the target is what causes the dreaded reverse pivot. However, I have found this to be farther from the truth. It is as simple as the weight staying too far back in the downswing. Let’s take a look at how this problem was fixed! 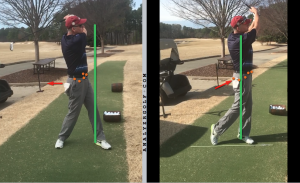 No more reverse pivot!!! Here are a couple things I would like you to notice.

How was this accomplished?

Contrary to popular belief, we fixed this by keeping the weight more forward! Even in the backswing! His cues were to keep the hips forward in the backswing, and then continue to push the belt buckle forward into the follow through. It was not fixed by telling the golfer to load into the right side so they could push off. 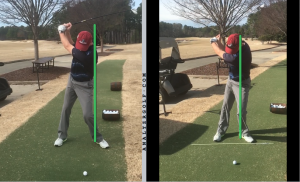 If you are under the impression that keeping your weight forwards or leaning towards the target in the backswing will cause a reverse pivot then I would suggest taking a look at these photos.

All of these professional golfers are leaning their spine (torso/upper body) towards the target as they turn in the opposite direction. Ironically, this is not causing them to shift their weight backward in the downswing. This lean or “tilt” is done in different degrees by tour players to help them stay centered, so their weight is forward enough when they hit the golf ball. 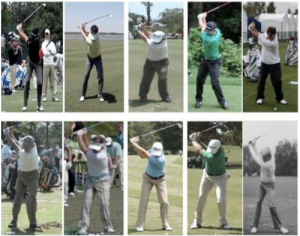 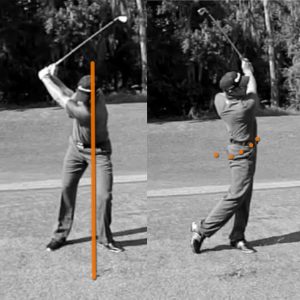 This is one of the movements that define world class players. This is one of the moves that we see the least of in amateurs. The poorest golfers have the weight the most back throughout the entire swing, while the worlds best players demonstrate that their weight is the most forward. Notice the orange line on Grant Waite. He is a former PGA Tour player who is world-renowned for his ball striking ability. His weight stays forward in the backswing and his belt buckle continues to move forward and up in the follow through as he rotates. He does not move the weight backward in the backswing but does continue to move the weight more forward by sliding, extending, and turning his hips. This gives him the best potential chance to make solid “ball first contact and hit the ball the farthest possible while controlling the curve of his golf ball.

PGA Tour players do not “load” their trail side by the definition most people use. If you think you struggle with a reverse pivot, please drop a question in the comments or reach out via email (Seth@iGrowGolf.com). Keep the weight forward, everyone!