Patrick Stephenson came to Operation 36 Golf Academies when we weren’t even called that.  At the time we were called The Edge Junior Golf Programs.  We were running 7-10 year old classes and 10-13 year olds classes at the time.  His father was looking for a fitness coach and after spending a few minutes on the range with him, I thought we could offer him both fitness help and a swing coach.

We decided to start a High School class right then and there and rounded up 3 other players in the area.  The ironic thing as we look back at that original High School class, we had 1 player end up playing golf at Clemson’s PGA Golf Management Program, 1 played Division I golf at Campbell University and Patrick is currently playing Division I golf at East Carolina University.  What a start to a high school program!

Patrick had some amazing ability and determination before he even stepped foot on Keith Hills and started working with our staff.  He would work extremely hard at everything we discussed both on the fitness side and on the golf side.  He was determined to play high level college golf and nothing was going to stop him.  We as coaches were along for the ride.

My fondest memory with Patrick among many was on the back 9 of the US Amateur Qualifier at Keith Hills in July of 2014.  Our coaches at iGrow were following him around the front 9 and he wasn’t playing great.  His dad thought Patrick needed a jolt so he came over to me and asked me to take the bag for the back 9.

I didn’t say much and we were just enjoying the afternoon chatting.  He had a stretch of a few bogeys in a row and he thought he was out of it.  I told him, “The last 3 holes were 2 birdie chances and an eagle chance on 18.  If you can go -2 on those 3 you might have a chance.”

Sitting in the fairway on 18 he had no choice but to pull 3 wood and hit it as hard as he could.  His 15 foot eagle putt found the bottom of the cup and he qualified at the age of 14 for the US Amateur at the Atlanta Athletic Club.  Patrick competed alongside future PGA tour players Bryson Dechambeau, Ollie Schniederjans, Jon Rahm and some of the best college players in the nation.  What a cool experience! 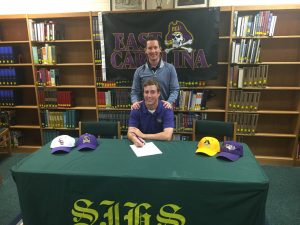