The 200 yard learning experience!  All of us love to blast driver as far as we possibly can.  When given a choice on a hole, most of us would choose driver as much as we could.  However, if we were truly trying to shoot the lowest score we might take a slightly different approach on certain holes.  The pro’s show us on TV all the time that sometimes hitting a 3 wood or long iron puts a player in the best position to score.

Mitchell started his Operation 36 journey in the matches on September 6th, 2015.  He was 14 years old and could hit the ball a good distance.  Thus, the first few yardages he could easily reach the green in 1 shot. 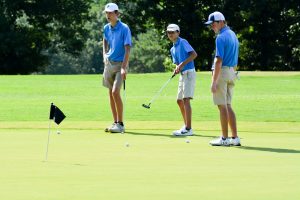 ter to lay up to 50 yards away and avoid the danger of water, hazards and short siding myself.  Making a 4 from 200 yards is not going to hurt you on a hole.  Making a 6 or 7 by hitting it in a hazard makes beating 36 very difficult.  I tend to be a little hard headed at times.  After 20 attempts, I started to figure out the way to move myself around the golf course in the least number of strokes.”

Mitchell has been a great role model for our younger students as he has come back and taught our 7-10 year old classes.  He’s an active member of his community in his church youth group doing service projects and missionary trips throughout the Southeast.  He has been a member of the Harnett County High School Golf team the past two seasons and qualified to play in a handful of matches.  He also competes in cross country, wrestling and basketball.  He has been a member of the Operation 36 All Star team for Keith Hills on 3 separate occasions.

Mitchell is now working diligently to beat 36 from the Orange tees at Keith Hills in the Operation 36 matches.  His low score this spring was a 38 and something tells me it’s not going to take him 21 attempts to beat this yardage.  He’s learned a lot from his time at 200 yards that will carry with him into his junior tournaments, high school matches and future Operation 36 matches.