Grit, determination, and perseverance. These words some up MacGregor Junior Academy Student of 3 years, Lily Rowe. One of the first students to join the academy in the spring of 2015, Lily has always displayed a motivated presence that came from within. She will be the last to tell you but there is a fiery piece deeply ingrained in her that is not visible from the outside which keeps her fighting to get better each and every day.

Lily began her Operation 36 journey as a complete beginner in the spring of 2015 at the age of 11. Since then she has progressed immensely. She will be the first to tell you that it hasn’t been easy. Her mindset however, is something comes naturally. This is rare. Always first to class and last to leave she demonstrates great poise on and off the golf course.

From my 3 years getting to know Lily, I have discovered her ability to be a natural leader. She is one to lead by actions before words. In my opinion, these create much greater impact. Peers tend to watch and follow versus hear and question. This all comes back to her poise on and off the golf course.

Lily passed Division 1 – 25 yards after a few attempts in her first semester. Eight matches later she passed Division 2 – 50 yards. She began to understand early on that this is about a process. She developed a great sense of delayed gratification, and learned to become okay with it. Her first attempt at Division 3 – 100 yards was on October 18th, 2015 where she shot a 40. Hovering around the low-mid 40’s throughout her 100 yard journey, it was on her 16th attempt where she shot a 36 to pass, 1

year and 4 days later. Lily current holds the junior record for the most strokes lost in career, 46.

Member of the all-star team the past 2 season, Lily most shot her lowest round from Division 4 during the Spring 2017 South East All-Star Championship. Her 37 was the low-round for team MacGregor. This was her 16th attempt from Division 4 and the near pass lit a fire inside of her. Just two days after this round, Lily reached out to me on her own, and said 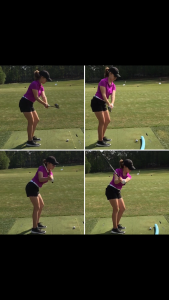 with the most confident tone I’ve heard from a 13 year year old, “I’m going to pass, are you available for a lesson this week?” Impressed by her actions, yet again, we worked on the range together for about an hour and a half.

Following our lesson, Lily didn’t go home, she walked 18 holes alone and shot the best score of her life. She fired a 79 form the red tees, completely skipping the 80’s and crushing her former personal best by 18 strokes! Since then she has played a few rounds from Division 4 – 100 yards with some friends and shot 36 or better a few times. Lily’s drive and determination leaves me with absolutely no doubt that she will be teeing it up 200 yards away from the hole in no time. I couldn’t be more proud of you Lily!

Keep up the good work and continue to be the natural leader you that you are.