Size and age is no factor for Division 4 student, Jack Adkins. Reluctant to draw attention to himself, Jack is a confident young player that has come along way in his 4 semesters in the MacGregor Junior Academy. At just 9 years old, he has built quite the resume in the 2 years he has been in the academy.

Jack discovered at an early age the benefit of having a good short-game and green-reading skills. He looked at the bigger picture. “How can I apply my skill-set to benefit my golf game in the long-run?” By spending many evenings creating putting games with his dad, Jack developed confidence and feel on the putting green.

When it comes to the final putting game in academy classes, Jack becomes both the friend and the enemy to his older classmates. 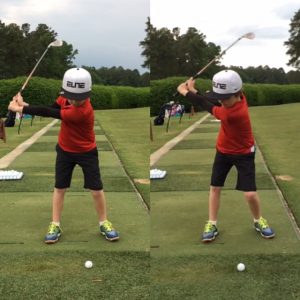 His ability to thrive in pressure situations creates a friendly love-hate relationship in team games. Jack’s submissive character makes him a great teammate, student, and player. His calm demeanor has helped him persevere in tough times.
Jack is currently playing from Division 4 – 150 yards in Operation 36 matches. It has not been an easy journey getting there but his ability to remain patient paid off. Division 3 – 100 yards began in the fall of 2015. There were many highs and lows throughout his 526 day journey. It was on his 19th attempt when he shot a 35 to passed. After asking him what went well, his response was, “I made a lot of putts”. The following week he tee’d it up from Division 4 – 150 yards as the youngest junior to play from that yardage in Operation 36 matches at MacGregor Downs.

Standing just 52.5 inches tall, I am excited to see this young player grow over the next few years both on and off the golf course. I have certainly enjoyed watching him sprout into the golfer he has become over the last 2 years.