Finding Great Power is a Great Responsibility…We Take it Seriously!

Finding power in the golf swing is a great area of concern for most players of the game.  They want to be able to be able to generate power efficiently from their golf swings so that they can effectively navigate the golf course and shoot lower scores. This is a great responsibility entrusted to golf coaches, knowing the areas of the swing that produce power and being able to effectively teach them to their students at the appropriate time in their training. 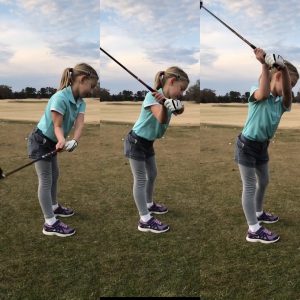 One of the first areas that a coach should look was addressed in an earlier post where I discussed keeping the golfers weight forward which was entitled “Starting Off on the Right foot…Well the Front Foot Anyway!” and by doing so enables a player to effectively maintain the low point of their swing whereby they are able to strike the ball first rather than the ground.  This post will begin to discuss another area of power production…swinging of the hands inward.

Now I could get scientific discussing the Law of Conservation of Angular Momentum, which clearly states that Angular Momentum is conserved when there is zero net torque applied to a system, where the system is the object or objects that are rotating…but what does this mean?? Angular momentum is simply the speed of an object that is traveling around a circle. A simple example of this would be the leg of a field goal kicker as it is swinging around his body.  By swinging it straight back and through, minimal angular momentum is generated versus swinging around a circular path around the body.

So what in the Sam-Hill does this mean for golf, you may be asking yourself. Well, as you swing the club, in the backswing, your hands should be moving along an inward path around the body. This will facilitate the path that the hands and arms will take down to impact; around the body. Just as with the field goal kicker…the hands, arms and club must do the same in order to adequately generate power. 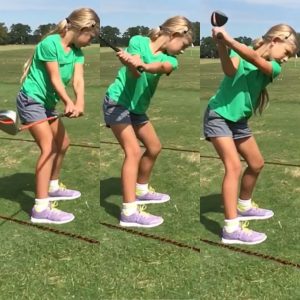 By effectively swinging along this arc not only do you generate the requisite power but you will also prevent your swing path from cutting across the golf ball creating that dreaded slice that is created from an out-to-in swing path as the club will now be swinging more outwardly. This is the path to great power and to hitting those high beautiful draws.