As we all know, curiosity is vital to learning. It makes learning more effective and enjoyable. When curious, you are preparing your brain to learn. Take a second to think back to when you were in school and the teacher was lecturing on a topic of interest. You were engaged and curious as to what he or she had to say next. It is only natural to remember what you’ve learned when the subject intrigues you.

Curiosity also has the ability to make subsequent learning more rewarding. When curious, increased activity occurs in the circuit of our brain that is related to reward and pleasure. The moment you find that connection to a futuristic goal while in the process of learning is when you reach this pleasurable state. In the Operation 36 Program, students have the common goal of shooting 36 for 9 holes. They are aware of their goal from the start and strive towards it in class, practice, and matches. The process and desire of reaching that target score builds curiosity.

A particular student of mine comes to mind when I think about curiosity. This student joined the Academy in the spring of 2016 and has developed a strong passion for the game in the past year. I believe this is due to his level of curiosity. Chase is more focused on the ‘why’ and ‘how’ versus the ‘what’. It is not out of the ordinary for chase to ask me for further clarification of a topic during, after, or between classes on the putting green or driving range. He has become the student of the game at just 10 years old which motivates him to learn and improve. 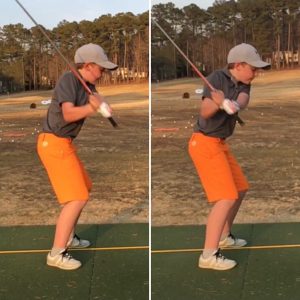 Let me tell you a little bit about Chase’s playing history. He entered the Academy with a some experience and was eager to learn and improve from the get go. Enrolled in matches, Chase breezed through Division 1 & 2 in his first two attempts firing a 34 and 32. His first attempt from 100 yards was on April 29th, 2016. After shooting a 40 on his first attempt from 100 yards he came to me and said, “that was easier than I thought it will be, I’m sure I will pass next week.” Little did he know it would take 12 matches later before he beat his baseline score of 40 with a 37 on November 11th.

His confidence had turned to frustration after that 37 and his curious mind came to me and said, “Why Coach Michael? My shots are going to the right and I’m missing putts to the right. Why is this? How do I stop it?” He began taking class more seriously, wanting to know answers. His curiosity and eagerness sparked a stretch of better play for the next several matches going back and forth between upper 30’s and mid 40’s every other match. It was on his final match of the Spring 2017 Semester where he shot a 35 to pass 100 yards. If I told him it was going to take 21 attempts over 402 days after his first attempt he wouldn’t believe me. He persevered and remained positive but his curiosity to learn and improve was his engine to keep moving forward.

See you at 150 in the fall Chase! Stay curious.